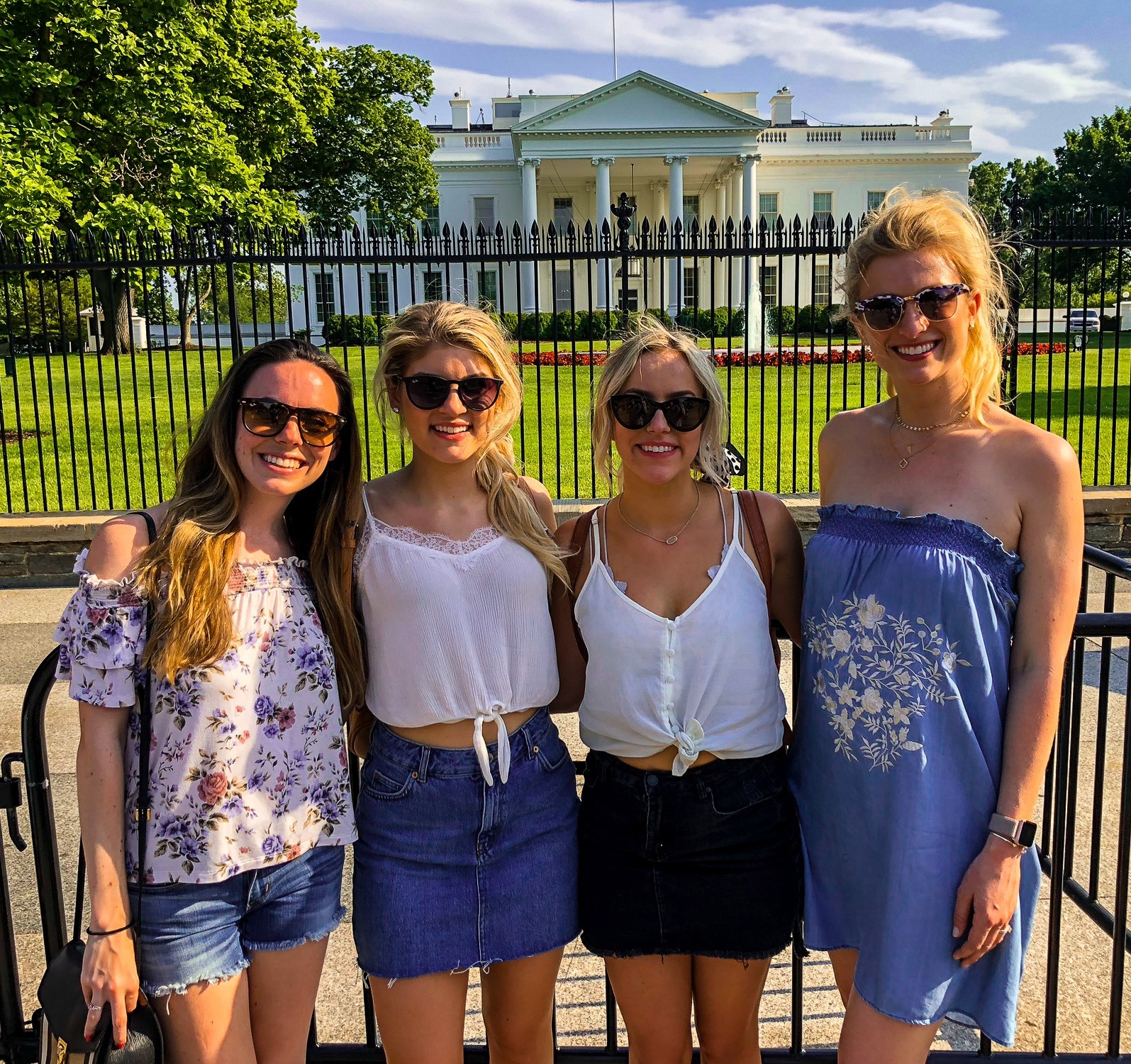 When I was in 8th grade, my class took a field trip to Washington D.C. with our history teachers and parents as chaperones. The bus trip was pretty long for kids that young, but we had a really fun time. We visited all of the famous monuments, and it was really nice, but I was also so young, so I was not able to completely appreciate it.

In 2018, I was lucky enough to go on a girls weekend trip to Washington D.C. with my 3 best friends from high school. We re-visited some of the most popular monuments, and we spent some time in Old Town Alexandria too, which was so cute! The posts below highlight the main attractions that I really enjoyed visiting as an adult, as I cannot remember all that I visited during my 8th grade trip. Next time I am visiting my parents house in Michigan, I will have to look for my old photos from my trip!

Old town Alexandria is such a cute historic little town, located only 15 minutes from downtown Washington D.C. The cobblestone streets are lined with restaurants, shops, and bars. We spent one night here, and we had such a great time. I would love to spend more time here one day.

This new-American style restaurant has a very fun atmosphere, and really delicious food! I had a quinoa burger, and it was so delicious! The food has a healthy twist on BBQ and Mexican, and the menu changes seasonally as well. Our drinks were delicious too! 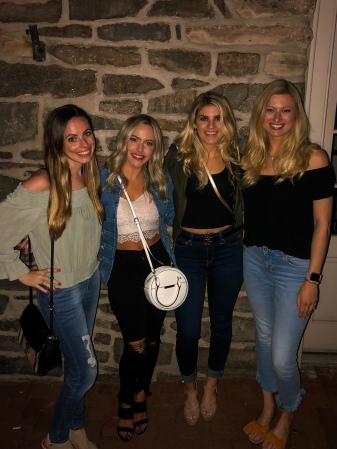 We visited this bar after dinner for live music and drinks. Every weekend night they have a live band, and they were actually really good. It is a small, Irish, intimate establishment, and it was so much fun!

The Washington D.C. National Mall looks very walk-able when looking on a map, but it is actually over 2 miles long. Be sure to definitely plan out which monuments and memorials are “Must Sees”, vs. ones you would like to see. Luckily for my school trip we had tour buses that drove us around, but when I went back with my friends, we walked, and it was 85*F and very humid.

The US Capitol building is the home of the United States Congress. Congress is part of the legislative branch of the U.S. federal government. We just caught a short glimpse of the building.

The Washington Monument stands tall and proud to celebrate and remember George Washington, the first President of the United States. Definitely an iconic symbol you can see from very far away. 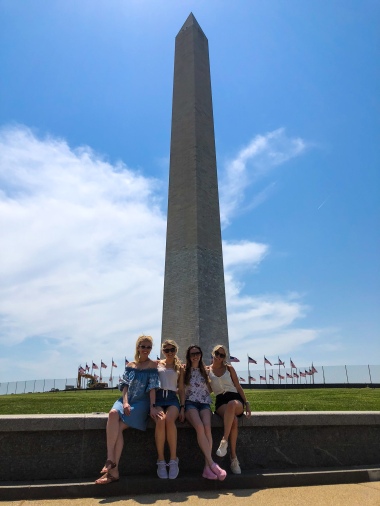 The White House is where the current president resides. George Washington selected the site, and every president since has lived in the house. There was high security nearby, but it was cool to check out! 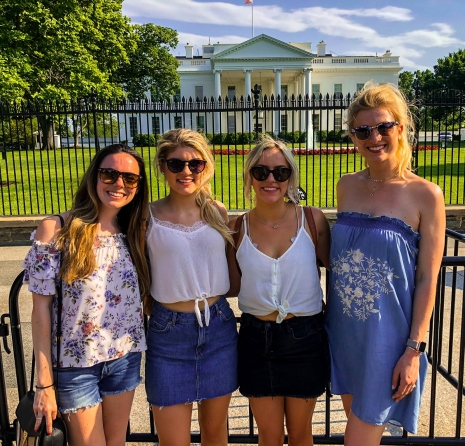 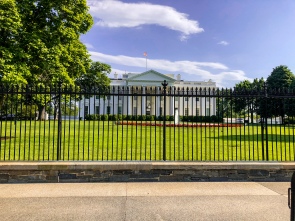 My girlfriends and I went to this museum after a long and hot day of walking all of the monuments because it was air conditioned, and we could watch an IMAX movie. The museums are mostly all free in the mall area, but for this one, we had to pay a small fee to watch the IMAX. It was definitely worth it. 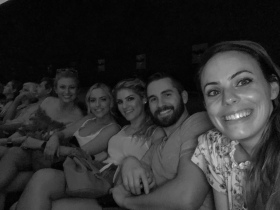 To honor Franklin Delano Roosevelt’s four terms in office, the FDR memorial has four outdoor rooms with murals and statues  to represent the issues from the Great Depression to World War II. My favorite was the memorial of him with his dog that looks like a Yorkie (I used to have a Yorkie!)

This memorial consists of 19 statues of soldiers from each branch of the Armed Forces, and they create a reflection on the wall, symbolizing the border between North and South Korea: the 38th parallel (19 + 19 = 38). The wall has over 2,400 photographs of those men, women, and dogs who served in the war. It was a very touching memorial.

The Lincoln Memorial stands proud and tall over the Reflecting Pond to commemorate Abraham Lincoln, the 16th president of the United States. Lincoln led the United States army to defeat the Confederacy, and he wrote the Emancipation Proclamation to abolish slavery. 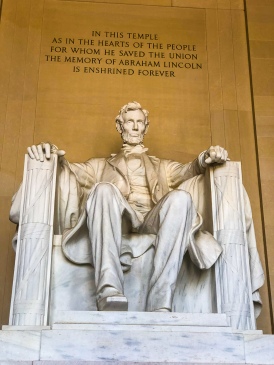 The Jefferson Memorial symbolizes liberty, and it is a beautiful Roman Pantheon style memorial that has marble steps and columns. On the inside stands a bronze statue of Jefferson, and the walls are covered with the Declaration of Independence and his speeches and letters.

The World War II Memorial stands to honor the 16 million men and women who served overseas. While we were visiting, some of the Honor Flights World War II veterans were visiting, being pushed around in their wheel chairs. It was special to witness, because I know people will not be able to witness that for too much longer. The monument stands with pillars of each state, and a rainbow pond in the middle. There are 4,048 gold stars, and each one represents 100 American military deaths; therefore, over 400,000 soldiers, sailors, marines, airmen, and military personnel lost their lives or remain missing in action from World War II.

The Vietnam Veterans Memorial was built to honor the members of the U.S. armed forces who fought, died in service, or were listed MIA during the war consisting of three parts: the Vietnam Veterans Memorial Wall, the Three Soldiers statue, and the Vietnam Women’s Memorial. I really loved walking along the wall to read the names; it made me think of my Grandpa who served in the air force, and how we were so lucky we did not lose his life in a war, but so many families were not as lucky as us.

The Dr. Martin Luther King Jr. Statue stands tall which stands as a memorial of his “I Have a Dream” speech and the civil rights movement. The memorial represents Dr. MLK as the “stone of hope” and the two pieces of granite placed near him represent the “mountain of despair.”

One thought on “Virginia (and Washington D.C.)”

This site uses Akismet to reduce spam. Learn how your comment data is processed.