My company built a training facility near Dallas Texas. Every year for promotion, or for other training, employees head to Dallas for training. Over 1,000 employees can stay on the campus, and we have training right there at the facility. The conference center features free food, free Starbucks, unlimited snacks, a free gym, a bar, and many outdoor activities. 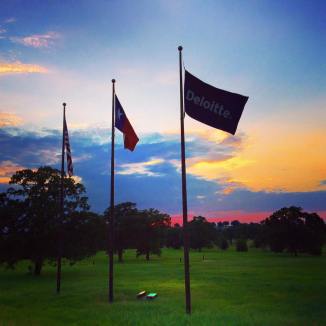 In 2015, when I went for new Senior Consultant training, some of my colleagues and I went downtown Dallas for a night to experience Dallas. We went to a live country music bar called the Rustic. I do not really care for country music, but it was so much fun! 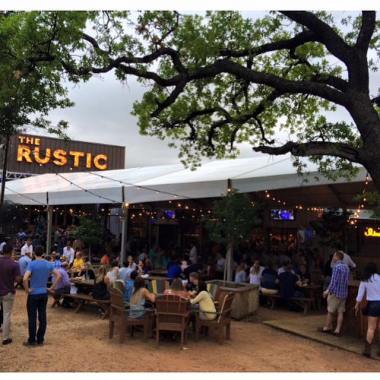 I went to El Paso for a week for work in 2015, and I was surprising pleasantly pleased with my stay. The city was really nice, and all the people were so friendly. We stayed right downtown next to the El Paso Chihuahua baseball stadium. It was crazy to look over the boarder of Texas and Mexico, and see how many people live in Juarez, Mexico. Juarez has 2.7 Million people, and El Paso only has 700,000.

My coworkers and I went to a ranch in El Paso called Cattleman’s Ranch, and it is where Chuck Norris filmed many movies. The ranch has plenty of live stock, and you can even feed them if you would like. I really liked seeing all of the animals. The ranch also has a restaurant on it, and we all had delicious steaks. 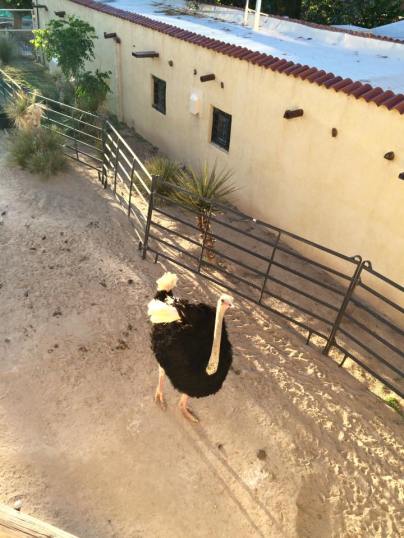 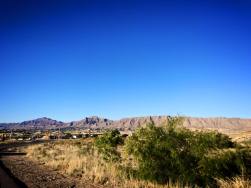 We went here for lunch, and if you like sweet potato fries they have the best fries with this marshmallow dipping sauce. I still dream about these fries. They were so amazing.

I went to Austin for a friends bachelorette party in 2018. We rented a really nice Airbnb that slept 14 girls. It was perfect because we were able to cook our own breakfast one day, and have pizza at night. 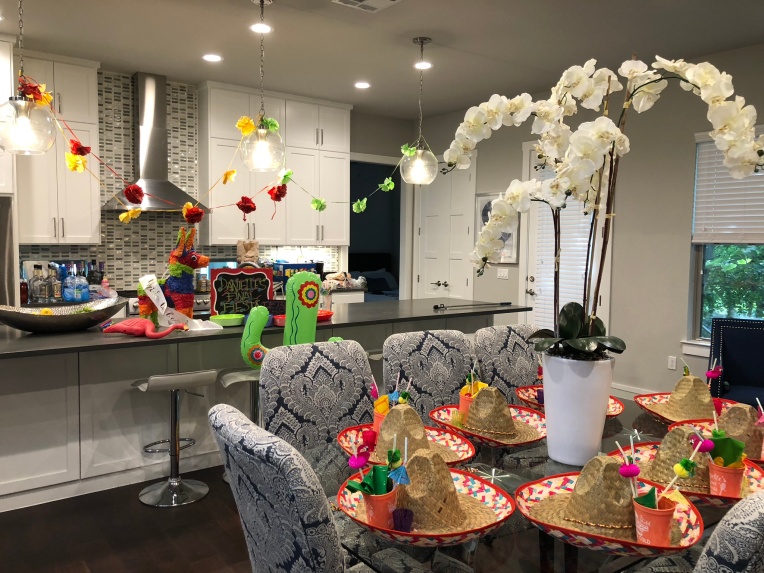 Our main activity of the weekend was taking a shuttle bus to Lake Travis and renting a Double-Decker party boat w/ Captain Kris. He took us out to a spot on the lake where we tied up to some other boats to have fun in the sun for the day. We brought a bunch of drinks, snacks, hot dogs, and burgers, and he grilled for us while we hung out. We ended up meeting a group of guys that went to high school with the bachelorette. It was such a small world! 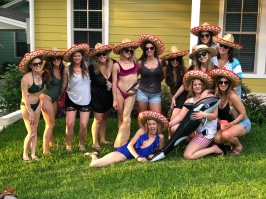 6th Street is a fun area that people described to us as the post grad bar scene. We were able to walk around and bar hop all day and all night and stop into different fun outdoor and indoor bars (I think all had outdoor areas though which was really nice since it was so hot outside).

We went to Rustic Tap Beer Garden and played giant beer pong, and it was so much fun! The girls kept beating the owner and his friends, so he gave us free shots. It was a really cool outdoor bar and a great idea for a game.

We went to dinner at Holy Roller, which is a restaurant ran by all women. They had really good food, but they were actually not very nice to us because we showed up 30 minutes before the kitchen was closing. They turned their act around after one of the girls complained and gave us two free bottles of champagne. It was not the greatest experience for our first night out, but we made up for it the rest of the weekend. 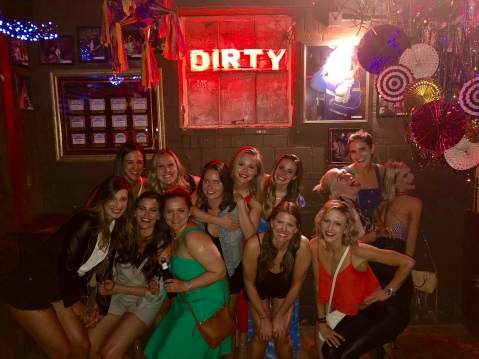 The most unique place we visited was the Container Bar on Rainey Street, which is made of giant Containers with a huge dance floor in the courtyard and a lot little corners to hang out in. 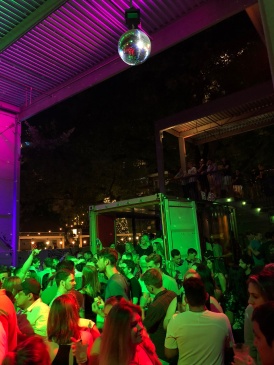 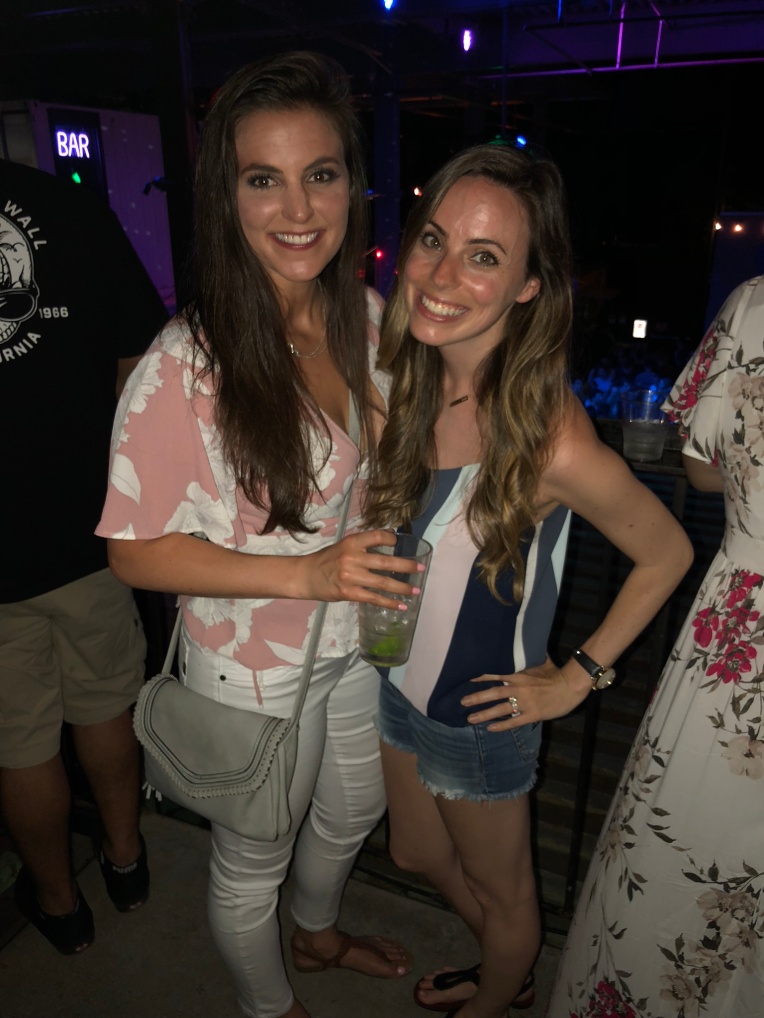 Right next to the Container Bar is a bar called the Bungalow, which has a large outdoor area with big picnic tables, and many outdoor games to play. They also have really good drinks! The Bungalow known for the “I hate you so much” wall, which is a fun play on the “I love you so much” painting. 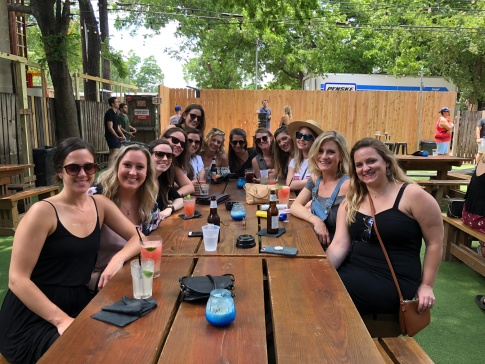 Icenhauer’s has great mixed drinks; we all got their large popular sangria in a mason jar. We hung out outside and danced with the DJ all day. Apparently they also have “Super Soul Sunday” dance parties with live music.

Austin is known for their food trucks, and Rainey Street has a lot with about 10 food trucks of various cuisines on it. My friends stopped at the grilled cheese food truck and the BBQ food truck. 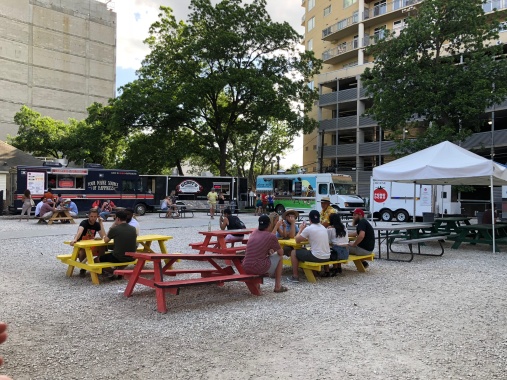 We went to Second Bar + Kitchen downtown for brunch one day. The restaurant did not have air conditioning, so it was quite unpleasant, but the food was delicious.

That same day, we went to dinner at Juliet Italian Kitchen where we had a semi-private event room. It was fun to have a nice dinner with everyone where we could all actually talk to each other and hear each other. The food was also very good!

This site uses Akismet to reduce spam. Learn how your comment data is processed.